The virgin forest reserve "Cordillera San Rafael" is located in southeastern Paraguay. The sanctuary is 73.000 hectare (730 km²) in size and is one of the last remaining larger sections of Atlantic Forest.

The Atlantic Forest is one of the earth's most endangered and biologically rich ecological systems. Originally, the Atlantic Forest covered eastern Paraguay, northeastern Argentina and the area along the Atlantic coast from south to northeastern Brazil. Of the almost 2 million km², which it once covered, today, only approximately 7 % of its original size remains because of massive clearing. The forest is now sparse and mainly consists of scattered isolated islands. These forests form important ecological niches for birds, mammals, reptiles, butterflies and plants. Approximately 8,500 of these animal and plant species are endemic, i.e. they are native to the ecological conditions of the Atlantic Forest and only exist in this region. Extinction threatens many of these animal and plant species. The Atlantic Forest is considered to be one of the earth’s 25 most important biological "Hotspots".

Original and Current extent of the Atlantic Forest

The Eco-Region of the Reserve

The Atlantic Forest can be divided into several eco-regions, according to geomorphic characteristics and climate conditions of the respective areas. The largest of these regions are the forests of southwestern Brazil, northeastern Argentina and east Paraguay, which cover the river basins of the Paraná and Paraíba rivers and are known as the Upper Paraná Atlantic Forest.
According to WWF, the Upper Paraná Atlantic Forest is one of the 200 most important biological regions on earth, with its rich plant and animal life. The largest and most impressive mammals of South America are native to this virgin forest, such as jaguar, puma, ocelot, tapir and capybara, in addition to 300 bird species. A rich variety of flora, including many tree species, ferns, and rare orchids characterize this valuable eco-system. 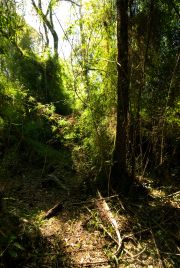 The San Rafael Nature Reserve is located in the departments of Itapúa and Caazapá in the "Cordillera San Rafael", a mountain range in southeastern Paraguay, with elevations of up to 500 m. The reserve covers an area of 73,000 hectares (730 km²), and it is the largest contiguous native Upper Paraná Atlantic Forest in Paraguay.
San Rafael is home to numerous exceptional animal and plant species, as well as to the communities of the Mbya-Indians, the indigenous inhabitants of Paraguay. Some Mbya-Indian communities are still living unchanged according to their traditions within the reserve. In 1992 the region was officially declared a sanctuary by the government, however the financial funds were lacking and they were unable to purchase the land from private proprietors to create a national park. As such, some owners, in spite of the official ban, are still interested in the forestry use of their lands.

The Threat to San Rafael

The existence of San Rafael is mainly put at risk by logging, poaching and clearing the forest to gain farm and grasslands. Slashing-and-burning outside the area of San Rafael often spread out of control and can lead to wildfires within the sanctuary. The local farming communities surrounding the reserve practice subsistence agriculture, often causing the soil to be depleted in a short period. This in turn causes the soil to be less fertile, to the point that farming is no longer profitable, leading farmers to clear more forest land for new fields. As San Rafael is one the last major woodlands in the area, it is at a great and increasingly grave risk of deforestation.

San Rafael is home to an incredibly rich and diverse variety of flora and fauna.
Explore the biodiversity »

We are an organization dedicated to the conservation of one of the last remaining remnants of Atlantic Forest in southeastern Paraguay. Our work focuses on forest monitoring, purchasing forest property, and developing sustainable land use practices in the surrounding areas.
More about PRO COSARA»